ABOUT OUR FOUNDER, THE CURRENT OWNERS & OUR TEAM!

After 20+ years of fabulous parties, great work, blood, sweat and tears, our Founder Kelly Kearney has RETIRED! We thank her and wish her well in the land of retirement! The new owners; Jeff Rosen and Erin Traylor are long time Bay Area food and hospitality pros so please trust you are in GOOD hands! 🙂 Chef Laurie Reffitt got her start at one of San Francisco’s renown Hot Spot, Stars, under Chef Jeremiah Tower. She later went on to open One Market with Bradley Ogden. Chef Katy Kenney sharpened her chops at Square One in SF, then the Townhouse in Emeryville, later she met Kelly in Alameda, where, they realized she would be a perfect fit for our sunrise staff. Chef Phillip Cha joined the staff with a vast knowledge of everything from Argentinean fair to the perfect lemon curd, but we love it most, that he can bring our computer back to life, and always seems to have 2 cans of ‘fix a flat’ in his car, now that’s a jack of all traits! Heather Thiel is leading light in the San Francisco Bay Area’s vegan, gluten free, and nutritionally based food movement. Educated at the California Culinary Academy in Baking and Pastry Arts and with 15 years experience in food production, menu design, marketing and sales, Heather brings her passion for wholesome baking to the Pacific Fine Foods

NY native Jeff Rosen moved to the SF Bay Area after attending FIU’s Hospitality Mgmt program in the late 1980s. In 1991 Jeff dove into the world of Bay Area fine dining by becoming the Executive Chef of Mallard Group Restaurants. Jeff ran the kitchens of 4 different and distinct dining concepts; Savannah Grill, Clark’s By the Bay, Buffalo Grill and Bighorn Grill.  While at Mallard, Jeff had the opportunity to work alongside two of his San Francisco culinary idols: Mark Franz of Farallon and Nick’s Cove and Nancy Oakes of Boulevard and Prospect. Chef Rosen then struck out on his own, opening the critically acclaimed Avenue 9 restaurant in the Sunset District of San Francisco. Jeff has been called an “Avatar of New American Cuisine” by Paul Reidinger of the San Francisco Bay Guardian Newspaper.

After a successful 7 year run, Jeff turned his work to College and University Food Service as Executive Chef of Stanford University’s Stanford Dining. While at Stanford, Jeff was a crucial part of the dining team that won the coveted Restaurants and Institutions Ivy Award as well as the Santa Clara County’s Acterra Award for Sustainability. Jeff has been a member of NACUFS and was the Pacific Region Culinary Challenge Champion in 2005.  He continued to co-chair and then chair the Culinary Challenge committee for the Pacific Region, Jeff has presented interest sessions at NACUFS Regional and National conferences most recently presenting “Maiz, Frijoles and Chilies; The Mexican Culinary Experience” at the Vancouver conference.  Jeff also had the opportunity to work with sustainability superstars Michael Pollan and Ann Cooper.

As a chef, it is important to know where your ingredients come from and to have a relationship with the people who produce and grow them. Jeff is passionate about resource conservation and supporting the local foodshed.  Jeff is still going strong and currently is the force behind “Club Ave 9” a roving secret supper club which you can find on Facebook and the interwebs. Chef Jeff Rosen continues to be one of the SF Bay Area’s leading artisan culinary driven food and beverage entrepreneurs.  In 2012 Jeff became a partner and the driving culinary force with Blue Heron Catering of Oakland and as part of that ownership group, opened the Cannery Cafe in Hayward CA in 2014. Developed a working partnership with Tanya Holland and the Brown Sugar Kitchen group for events, catering and pop ups. A 2nd Cannery; The Cannery Kitchen & Tap opened in late 2020 in the newly developed Castro Valley Marketplace. The Cannery Kitchen & Tap is a fully realized vision of community with soulful, honest cooking and local beers on tap.

A southern California native, Erin learned how food is love at the foot of her Mom while she cooked and baked.  Her passion for all things culinary continued as a young adult living in England and traveling through Europe in search of the perfect scone. With no formal culinary education or Hospitality management degree, Erin learned her craft in kitchens and restaurants after graduating from University of San Diego with a degree in Communications.

Erin moved to the SF Bay Area in 2010 to further pursue her love of fresh seasonal produce and the culinary creativity that Northern California is best known for. Soon after, while working for Betty Zlatchin Catering Erin quickly moved from accountant to Operations Manager learning and excelling in the details of management. She furthered her experience with culinary operations at the highly touted Southern comfort restaurant group running Farmer Brown and Little Skillet in San Francisco. In 2018, Erin took the next step by opening the acclaimed Afro -Caribbean hit Isla Vida with partner Jay Foster. During this time Erin also pursued her true passion which is baking creating fabulous wedding cakes for Bay Area brides from 2017 to 2020.

Erin had taken her extensive catering experience while at 415 and Foxtail catering to the Castro Valley Natural Grocery running their Tomato cafe food service. Erin not only loves baking but the seasonal and organic ingredients that are plentiful in Castro Valley that go into her menus. A beer aficionado, Erin appreciates and knows the local craft brewers and their lines of rich, hoppy IPAs and lagers.

Kelly Kearney along side her inspiration. 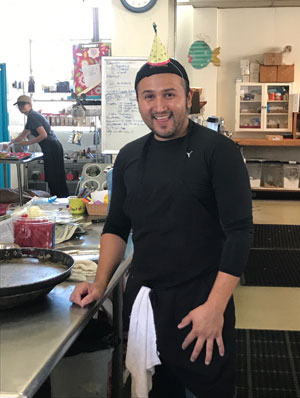 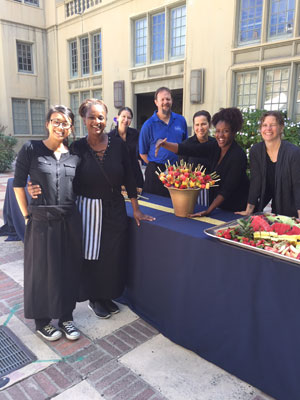 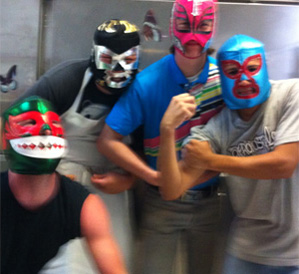 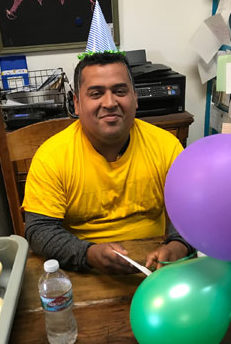 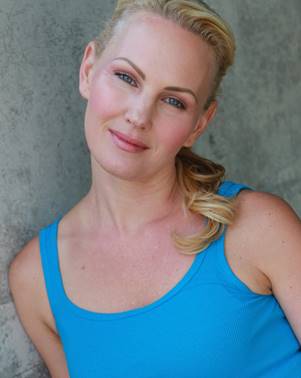